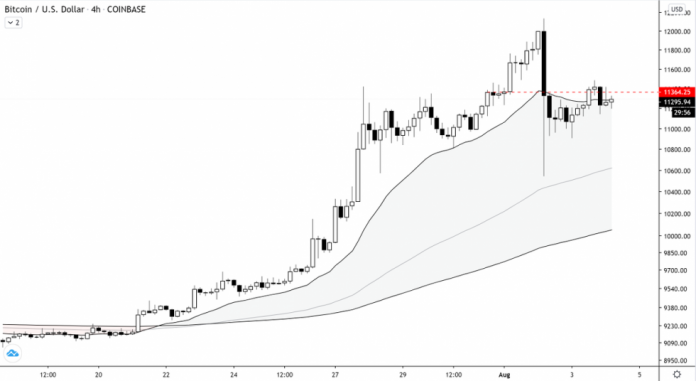 Bitcoin and the entire cryptocurrency market are trading sideways today. This comes as a result of the failed attempt to start a leg higher that came about yesterday.

During this time, buyers pushed BTC as high as $11,500. Once it reached this level, it faced an influx of selling pressure that caused its price to slide lower.

Analysts are noting that the benchmark cryptocurrency does remain technically strong at the moment, but for it to push higher, it may need to break above one crucial level.

At the time of writing, Bitcoin is trading down just under 1% at its current price of $11,150. This is around where it has been hovering over the past few hours.

Its decline to these lows came about after bull pushed it as high as $11,500 yesterday. The selling pressure here was significant and subsequently caused its price to reel down to its current levels.

For the cryptocurrency to see any further momentum in the near-term, buyers must surmount roughly $11,360 – as one analyst notes that this has been an important level over the past week.

“Can someone please push the price above the dotted line?” One analyst asked while pointing to the below chart.

Here’s the Crucial Level That Could Catapult BTC Higher

While looking towards Bitcoin’s macro trading range established over the past three years, the cryptocurrency is currently resting just below its mid-range resistance.

Another analyst is noting that this is a crucial level that, if broken, could cause it to rally to fresh highs.

“BTC: One significant level is the HTF mid range. HTF close above it on strong volume would give me conviction this is going much higher. Until then I believe price remains within the lower half of the macro range for several months. Deep pullbacks are for buying!”

How Bitcoin responds to these key levels in the days ahead could have heavy sway over its mid-term outlook.

Proof of Keys Event May Highlight Centralization of Crypto, but Some...