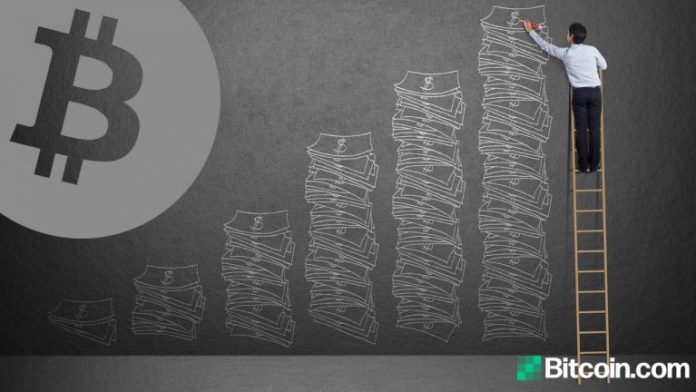 On Wednesday, as the leading crypto asset bitcoin has been riding above the $50k handle, the well known firm Blockchain.com announced the company has raised $120 million in a strategic financing round. Blockchain.com says the financing comes at a momentous occasion, as the firm’s wallets have seen 65 million created to-date in over 200 countries.

Blockchain.com is a popular cryptocurrency company that has been around since 2012. On February 17, 2021, the company’s cofounder and CEO, Peter Smith, revealed Blockchain.com has raised $120 million from a number of macro investors.

Smith also recalled how the company raised money in 2014 and they only had around two million wallets issued at the time.

“Six years later, we’ve come a long way,” Smith wrote on Wednesday. “Bitcoin just crossed the monumental price target of $50k. Over 65 million wallets have been created in 200+ countries. And 28% of all bitcoin transactions since 2012 have occurred via Blockchain.com, representing billions in transaction volume,” the cofounder added.

The pandemic has also added an “unprecedented level of distrust in traditional financial institutions,” which has spurred demand. The London-based company sees a fundamental shift coming when it comes to commerce, investments, and global communications. Blockchain.com’s cofounder stressed that he “couldn’t be more optimistic about the future.”

“Paradigm shifts like crypto can feel to the world as though they happened overnight— but for those of us working day in and day out to build technology and innovation in crypto, this has been a long time coming,” Smith insisted.

The Blockchain.com CEO said to him, cryptocurrencies seem like the “real Robin Hood of finance,” and he highlighted how a number of well known firms are adding BTC to their balance sheets.

“Our mission is to empower anyone anywhere to control their money and we’re just getting started,” Smith concluded during the fundraising announcement. “What I’m most excited about hasn’t happened yet,” he added.