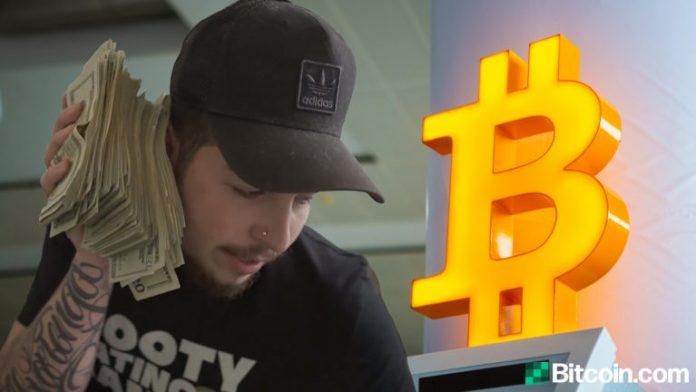 On January 23, 2021, the popular Youtuber Mambafx published a video of himself withdrawing $16,000 in cash from bitcoin ATMs. The video shows how it took multiple bitcoin ATMs to complete the process but by the end of the 17-minute film, Mambafx withdrew over $16k by selling bitcoin to the automated teller machines.

Mambafx is a popular popular trader on Youtube and various social media outlets. Just recently, he filmed a video about cashing out some bitcoin. In a previous Youtube video, Mambafx showed how difficult it was to cash out $5k in bitcoin (BTC) by leveraging cryptocurrency ATMs in his region. In his latest video shared with 86,000 channel subscribers, Mambafx successfully cashes out over $16k in bitcoin.

Of course, the process of cashing out $16,000 worth of bitcoin and turning it into cash wasn’t easy. Even at the very first bitcoin ATM Mambafx visited that allows individuals to sell bitcoin said that it would let him take $15k. However, after reading the machine’s terms of service (ToS), Mambafx was only allowed to take out $2,900 in cash and all of it in $20 bills.

The trader also told his Youtube subscribers how BTC’s price was on a tear and he had made a few thousand dollars extra before cashing out. Further, Mambafx said that he may even attempt to do a $100k withdrawal next and asked his fans if people would like to see that video in the future.

Despite the success in withdrawing $16k, Mambafx said he suffered “10% losses on these withdrawals” when using these bitcoin ATMs. Just before visiting the first bitcoin ATM Mambafx said: “So we’re gonna go into the mall, hopefully smoothly withdraw $20k, very f***ing unlikely, but we’re gonna try and see how many of the ATMs we gotta go to.”

By the length of the 17 minute+ video, viewers can watch Mambafx being forced to stop at a myriad of bitcoin ATMs in order to stack $16k in cash. Interestingly, the machines only spit out 20 dollar bills and at one point while withdrawing $3k, Mambafx thought the money would get stuck in the slot.

By the end of the video, Mambafx managed to extract approximately $16,440 after using his smartphone app to find all the two-way bitcoin ATMs that would allow him to sell BTC. Despite paying a whopping 10% fee per withdrawal at the end of the video his bag was filled with an enormous amount of $20 bills. It’s likely the well known Youtuber probably paid a few bucks for BTC network fees as well. The video also highlighted the fact that Mambafx had to wait a long time for network confirmations. The video shows Mambafx did manage to get a small amount of $100 bills during the process.

The two-way ATM often requires a single confirmation or more on the BTC network and it gives the customer a voucher in order to retrieve the cash after a confirmation completes. Mambafx sat around quite often waiting for the network confirmation and then withdrew his cash after the fact with his voucher. It definitely is a precaution for protecting the ATM from a replace-by-fee (RBF) scam, but makes for a long video of waiting when someone like Mambafx wants to withdraw $16k.

Selling $100k worth of bitcoin to crypto ATMs in order to withdraw all that cash could take an extremely long time for Mambafx to accomplish.