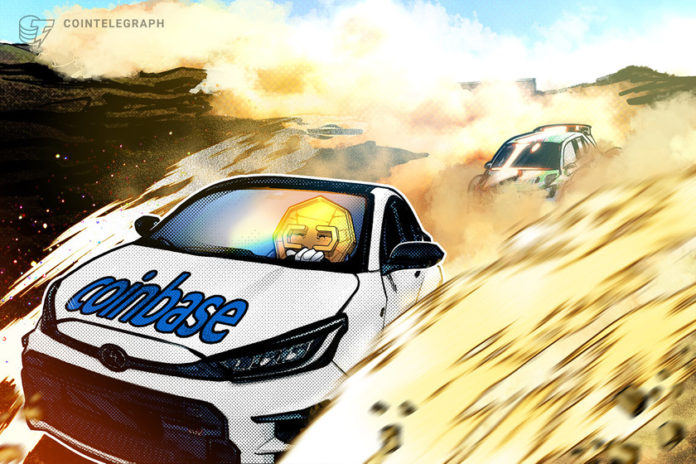 Ark Investments topped up its Coinbase stock shortly after FTX’s liquidity issues were revealed, which came after Coinbase stated that it had “minimal exposure” to the troubled trading platform.

Amid the FTX and crypto market chaos, Cathie Wood-led Ark Investments has increased its Coinbase stock holdings with a purchase of 237,675 Coinbase shares worth about $12.1 million on Nov. 9.

The tech-focused investment firm’s purchase came after Coinbase stated in response to FTX’s liquidity crisis that it has “minimal exposure” to the now cash-strapped cryptocurrency trading platform with only $15 million on deposit to “facilitate business operations and customer trades.”

Coinbase also added that it has no exposure to FTX’s native token, FTX Token (FTT) — which has fallen 84.08% since Binance announced its decision to liquidate its entire FTT holdings late on Nov. 7 — and its partner trading firm Alameda Research.

Wood’s Nov. 9 purchase came following a 10.84% fall in Coinbase’s share price on Nov. 8, which was an expected result follow on from the FTX controversy, according to Owen Lau, a stock analyst at investment banking firm Oppenheimer:

“While COIN has minimal exposure to FTX, before there is enough evidence that the contagion risk is contained, the pressure on crypto prices will likely weigh on COIN.”

It was also the investment firm’s first trade for Coinbase since it sold off over 1.4 million of its shares — which were then worth $75 million — across ARKK, ARKF and ARKW on July 26. 2022.

The large sell-off came in response to the U.S. Securities Exchange Commission (SEC) conducting an investigation into allegations of Coinbase engaging in the insider trading of unregistered securities.

However, Wood’s latest buying spree has brought the firm’s Coinbase shares tally back up to 7.625 million, which is about one million shares less than its peak of 8.675 million recorded on July 20. 2022, according to data from Cathie’s Ark.

Coinbase now has the 11th largest holdings in Ark’s main investment fund, ARKK, which now represents 3.79% of the portfolio. Coinbase’s stock went up 10.74% on Thursday, increasing its share price to $50.92, according to Yahoo Finance.

On Nov. 10, Coinbase said it was eliminating 60 positions at the firm.

“Today’s actions were surgical. We are just making sure we are not wasting a dollar,” said Coinbase chief financial officer Alesia Haas, according to a Nov. 10 report from Bloomberg.

“If we see that there is going to be further depressed revenue, and if we believe this is going to impact beyond the scenarios we have already planned for, we will have to take further cost-saving action.”

Coinbase IPO Set for April 14 via Direct Listing on Nasdaq