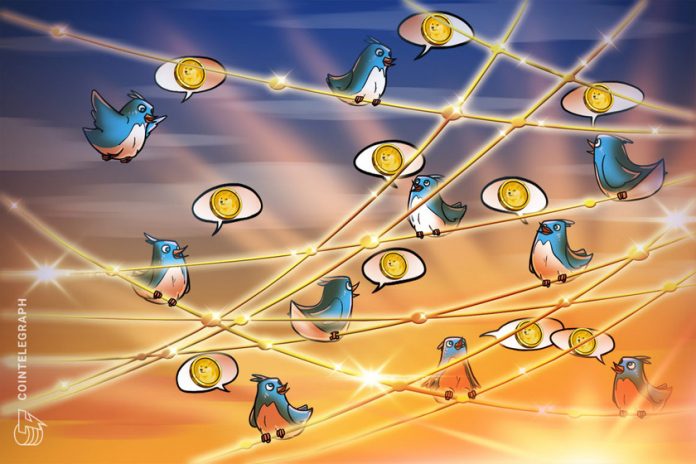 The meme-based cryptocurrency has exploded on Twitter over the past 24 hours, mirroring the rapid appreciation in DOGE price.

Dogecoin (DOGE), a meme coin created as a joke, has seen a groundswell of Twitter activity in the past 24 hours after attention was thrown on the coin by the now-infamous Reddit group responsible for pumping the share price of GameStop.

Dogecoin’s Twitter volume — the number of daily tweets versus the 30-day average — skyrocketed 1,787% on Thursday, according to crypto data provider The TIE. In total, there were 89,991 tweets about DOGE over a 24-hour period.

In fact, The TIE’s data suggests it’s the first time any altcoin has surpassed Bitcoin in terms of volume.

Dogecoin tweet volume has surpassed Bitcoin over the last 24 hours.

This is the first time we have on record that an altcoin has been tweeted about more than Bitcoin over a 24 hour period.

In addition to seeing a spike in Twitter activity, Dogecoin experienced a similar surge in trading volume. The digital currency’s price appreciated 223% over the 24-hour period.

The DOGE price appears to have spiked due to worldwide attention on r/WallStreetBets, the Reddit group that successfully caught Wall Street sellers in a short squeeze by gobbling up shares of GameStop and AMC. Although the subreddit’s moderators have attempted to remove any attempts to pump the DOGE price, Reddit users on other channels have left subtle hints to invest in the cryptocurrency.

A Twitter account called “WSB Chairman” (albeit with the disclaimer “NOT ASSOCIATED WITH r/WSB”) also left a not-so-subtle hint just after midnight on Thursday:

Has Doge ever been to a dollar?

At the time of writing, DOGE was valued at $0.024 for a total market capitalization of just under $3.1 billion. It has surpassed cryptocurrencies Tezos, Monero and EOS following its latest spike.