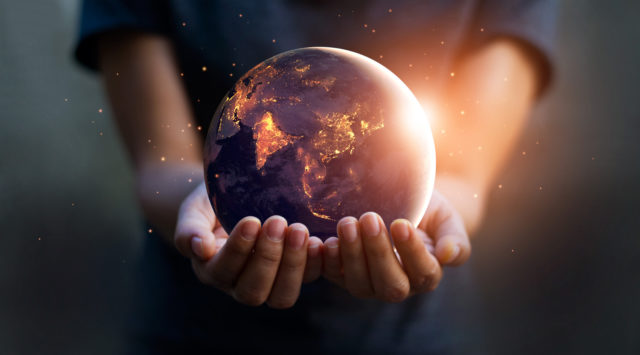 Bitcoin has faced down many setbacks over recent years.
BTC trading has been banned by the Chinese government. Executives from Goldman Sachs and other institutions have come out against the cryptocurrency. And there still is a broad sense of mystery that surrounds Bitcoin and cryptocurrencies in the public, thus limiting adoption.
Yet there remain prominent financial analysts and authors expecting for the cryptocurrency to eventually become the world’s reserve currency.
Bitcoin Is Likely to Become the World’s Reserve Currency: Investor
Speaking to Max Keiser of Keiser Report, CEO of e-commerce company BuildDirect and a financial author Jeff Booth said that he thinks Bitcoin is a “likely candidate for world reserve currency” status:

“First of all, I see Bitcoin as a likely, a very likely candidate for a world reserve currency. So, I see it has a really good chance of winning over time as it works on a network effect.”

Booth is far from the first individual to have identified a scenario in which Bitcoin rises to become the world’s reserve currency, or at least grows to a point where it makes an attempt at that title.
Preston Pysh, a prominent financial analyst and author, explained that the fiat money system is poised to “break.” By “break,” he means a world where there is either complete “social unrest” due to effectively too much money in the system or a “natural transition to a different form of money” as people lose faith in the old system.
Pysh sees Bitcoin as a likely contender to become the “different form of money” because “it’s the option none of the governments want, but it’s also the solution they can’t easily stop.”
The former head of Goldman Sachs hedge fund sales Raoul Pal has echoed this line.
He explained in a May newsletter:
“It is an entire trusted, verified, secure, financial and accounting system of digital value. […] It is nothing short of the future of our entire medium of exchange system, and of money itself and the platform on which it operates.”
Where Could BTC’s Price Move Towards?
In a world where Bitcoin is the world’s reserve asset or on its way to becoming one, where could the price of one BTC reach?
As it stands, the answers to this question are mixed: there are numerous macroeconomic and geopolitical factors that could alter the answer.
Raoul Pal, though, has speculated that Bitcoin reaching a $10 trillion market capitalization in the coming market cycles is feasible. He made this comment in reference to his sentiment that Bitcoin becomes the basis and cornerstone of the future financial system.
Also speaking to Max Keiser on Keiser Report, Pal explained:

“If it becomes an ecosystem, and we believe it will be and it will take the whole ecosystem with it as well, then yes, I think a $10 trillion number is easily achievable within that process.”

For some context, a $10 trillion market corresponds with around $500,000 per BTC. That would mark a 5,200% rally from the current price of ~$9,400.
Other long-term predictions are in that range as well, as before the cryptocurrency becomes the world reserve currency, it will need to surmount gold’s $10 trillion market capitalization first.
Featured Image from Shutterstock
Tags: xbtusd, btcusd, btcusdt
Why a Financial Author Thinks Bitcoin Is “Very Likely” To Become the World’s Reserve Currency

Why The Bitcoin Halving Will Change Everything

IMF Proposes to ‘Fork Off’ Money From E-Cash