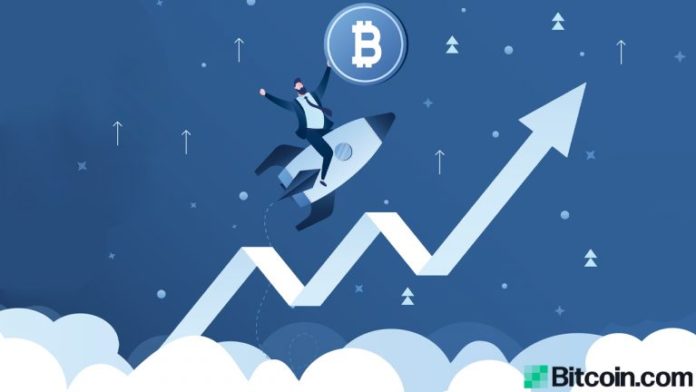 The comparison website that operates in 83 countries, finder.com, has recently published its quarterly bitcoin price prediction report for 2021 and the panellists are very optimistic about bitcoin’s future value. A number of Finder’s panel of 35 fintech specialists believe that bitcoin is set to crack $100k this year.

Bitcoin proponents and crypto enthusiasts believe that the cryptocurrency economy will continue to blossom after 2021’s climactic year wraps up the first quarter. On Monday, the comparison website finder.com published another predictions report that is tied to the value of today’s leading crypto-asset, in terms of market capitalization. BTC has seen a spectacular run-up in 2021 and Finder has asked 35 panellists for their expert opinions on just how high it will go this year and when the bull run might end.

“Bitcoin is the ultimate long-term store of value and will gradually replace gold and bonds in that role,” Fröhler commented after sharing the prediction.

Meanwhile, following the two high predictions the Origin Protocol cofounder Josh Fraser chose an above-average end-of-year prediction of “$150,000.” Fraser said it all comes down to supply and demand and stressed that “demand will only continue to increase while supply diminishes.”

Over a Third Believe the Bull Run Will End in Q4, Nearly a Third Say It Ends in Q3

Another prediction that’s below the $100k mark is from Rouge International managing director Desmond Marshall. The Rouge executive says “the scarcity will push BTC up, up to a point where people hoard like gold and limit the actual normal trading as people may refuse to sell.”

Marshall’s end-of-year finder.com forecast is $65,000 per unit. Additionally, over a third (36.36%) of the respondents believe that the BTC bull run will lead into Q4 2021. Nearly a third (30.30%) stress that it will only last until the third quarter of this year.

Finder’s participants think there could be a possibility of a major hack in 2021, as 26% say this is a strong possibility. Moreover, 32% of the 35 panellists think that a major company like Paypal or Tesla could “retract from the market.” Still optimistic developments in the space have pushed the price of BTC higher so far. This trend will continue to propel bitcoin, the assistant professor at the City University of Hong Kong, Simon Trimborn said in the study.

“Developments like the listing of Coinbase and the investments of companies into Bitcoin have the potential to push prices higher,” Trimborn wrote.

Bitcoin Is Considered Undervalued and Could Reach $1 Million by 2025

Even though bitcoin (BTC) has risen higher consecutively for the last six months, approximately 51.52% say that BTC is still undervalued. 24% remarked that they believe bitcoin is overvalued, and around the same amount of panellists think it’s currently fairly priced. Bitbull Capital COO Sarah Bergstrand said that someday BTC will be priced at a million dollars per coin. She said that 2025 might be too far away to predict such a price, but in her opinion, the forecast could come to fruition.

“She’s not the only panellist to give this forecast,” Finder’s report emphasized.

“The only question that needs asking in terms of longer-term valuation is whether you think bitcoin will be around in 2025. If the answer to this question is ‘yes,’ the economics support a much higher valuation. It’s as simple as that,” Kruger said.

Toward the end of Finder’s report, the study shows what the panellists think in regard to who owns the most BTC.

“Institutional investors currently own the smallest chunk of the market (25.07%),” the report notes. “[This is] followed by retail investors (28.23%) and whales (46.70%), according to the panel average.” Finder’s study with 35 fintech specialists can be read in its entirety here.

What do you think about Finder’s poll and the panellists’ predictions for 2021 bitcoin prices? Let us know what you think about this subject in the comments section below.

Satoshi’s 21 Million Mystery: One-Millionth of the Bitcoin Supply Cap Is...