Bitcoin has remained stable over the past 7 days, some cryptos are seeing moderate gains.

Monday, Feb. 4 — crypto markets have continued trading sideways over the past 24 hours, while Bitcoin (BTC) has been reasonably stable over the past 7 days, according to data from CoinMarketCap.

The major cryptocurrency Bitcoin is up around 0.2 percent over the past 24 hours, and is trading at $3,470 as of press time. However, following some slight losses on the week, Bitcoin is holding its weekly momentum, reporting 0.26 growth over the past 7 days at press time. With that, Bitcoin is down significantly over the past 30 days, down 8.6 percent from around $3,799 on Jan. 4. 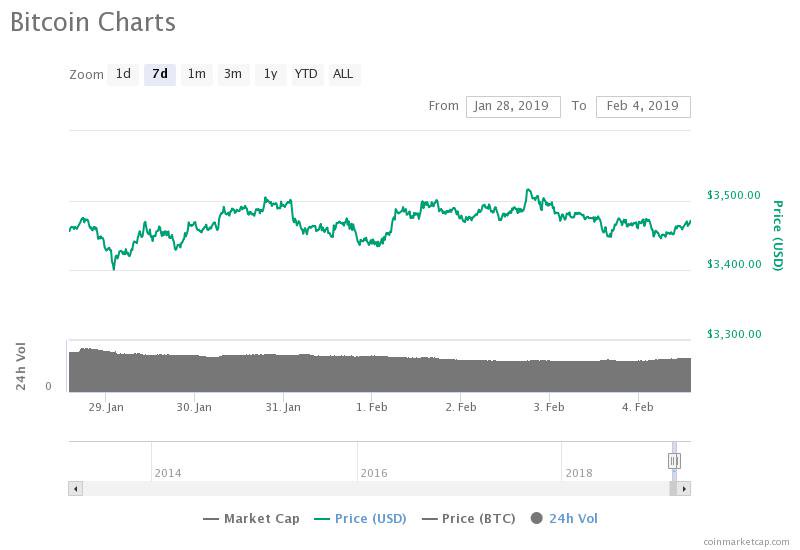 Ripple (XRP), the second-largest cryptocurrency by market cap, is up about 0.76 percent over the day, and is trading at $0.303 as of press time. The digital coin is up 3.89 percent over the past 7 days.

Total crypto market capitalization amounts to $114 billion at press time, seeing a slight increase from $113.4 billion over the 24-hour period.

Maker (MKR) token, the 19th top coin by market cap, has seen its price skyrocket by more than 17.5 percent on the day. Other coins that have seen significant fluctuations over the past 24 hours are Binance Coin (BNB) and Tron (TRON), which are up 6.8 and 6.26 percent, respectively.

Recent reports revealed that major Canadian crypto exchange QuadrigaCX has lost $145 million in digital assets following the sudden death of its founder Gerry Cotten, who was the sole controller of the exchange’s cold wallets and corresponding digital keys.

Following the news, crypto and blockchain writer Joseph Young emphasized that QuadrigaCX’s incident will “not have any impact on Bitcoin,” citing the Chainalysis report revealing that around four million bitcoins had been lost forever due to wallet losses or physical destruction by November 2017. At press time, such amount of Bitcoin is worth of $13.8 billion, or around 22 percent of its current market capitalization.

Meanwhile, stock markets are up on Monday, with the NASDAQ outperforming with almost 0.9 percent growth and the S&P 500 reporting around 0.3 percent gain, according to CNBC. Stocks have reportedly completed last week with their best monthly growth since October 2015, while the S&P 500 saw its largest one-month rise since 1987.

Major oil indexes have seen mixed signals, with West Texas Intermediate (WTI) down around 1.21 percent, Brent Crude down 0.29 percent decline, according to data from OilPrice. The OPEC Reference Basket is down 0.42 percent at press time.

What Hope Do Bears Have If Bitcoin Holds $11,500? Analyst Asks

Here’s Why Bitcoin Could Crush Altcoins in Coming Weeks