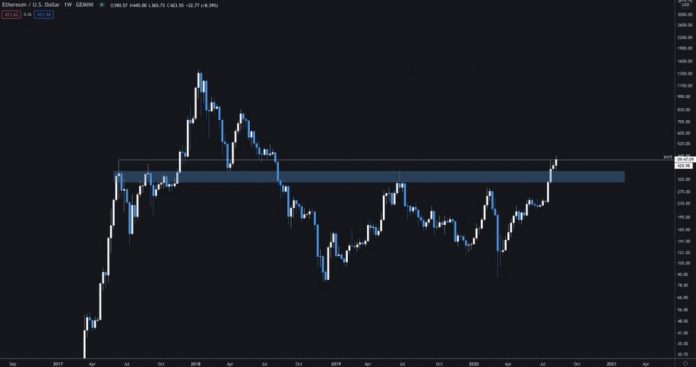 Ethereum has been caught in the throes of a consolidation phase ever since it faced a rejection at just below $450 earlier this week.

The cryptocurrency has not been able to maintain the intense momentum that sent it to these highs and has been largely trading between $420 and $430.

It is important to note that the cryptocurrency was able to post a daily and weekly candle close above $425 yesterday – an incredibly bullish sign indicating that upside may be imminent.

Analysts are now widely noting that this will enough to lift it higher in the days and weeks ahead, but it may first need to dip slightly lower.

At the time of writing, Ethereum is trading down just under 1% at its current price of $430. This is around where it has been trading for the past day.

It is important to note that the cryptocurrency was able to post a weekly candle close above $425 – which is a historically important level that analysts have been closely watching.

Prior to the bullish close yesterday, one analyst even went so far as to note that a close above this level could mark the start of ETH’s movement towards $500.

“ETH / USD: Seems as though bears are trying to get this weekly close below $425 which was my last major resistance level before we start running up towards $500+…”

The same analyst noted earlier today that he suspects a sharp upswing towards $525 is imminent in the near-term, but that Ethereum first may post a slight decline towards the lower-$400 region.

“ETH / USD: Weekly close above $425 is exactly what we wanted to see, now possibly a LTF pullback but eyes on the next target of $525 if we can see another leg upwards… After 3 weeks its nice to see this level get flipped into support and for bulls to take another key level.” 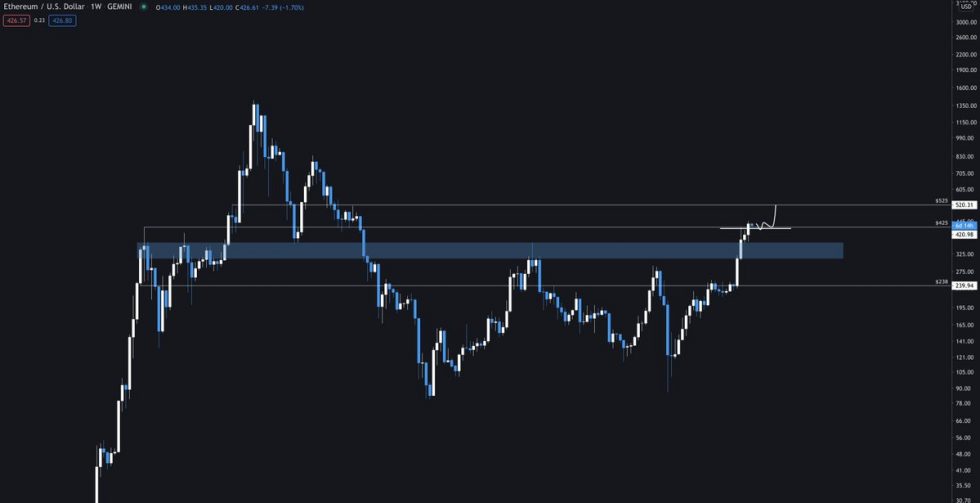 Unless Bitcoin starts trending lower and creates headwinds for the entire market, it is highly likely that Ethereum’s uptrend is still in its early phases.

Analyst: Ethereum May Grind to $280 Before ETH 2.0 Hype Propels It Higher

Ethereum Bulls Need to Act Soon “to Survive”: Here’s Why