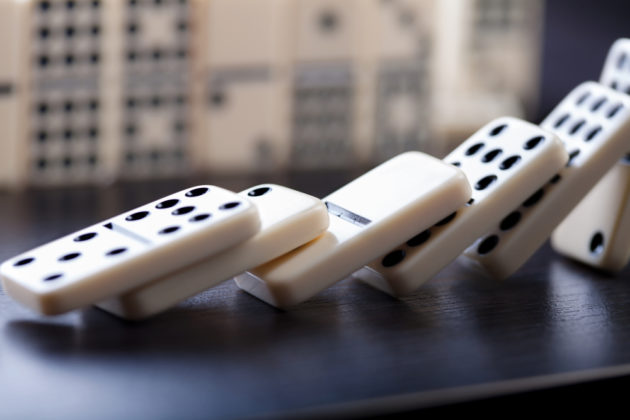 Bitcoin’s dominance over the aggregated cryptocurrency market has remain steady throughout the past several months
This stability has come as most altcoins either shed value or hold up against their BTC trading pairs
Until the benchmark cryptocurrency cedes some of this dominance, however, altcoins will not be able to gain any independent momentum
That being said, analysts do believe that the proverbial “altseason” could be imminent, as BTC’s dominance over the market may soon collapse

Bitcoin has remained in firm control over the market over the past few months. Altcoins have been closely tracking its price action, not being able to incur any independent momentum — with only a few exceptions.
The aggregated crypto market – excluding Bitcoin – started to gain some independent momentum in mid-February, which happens to be when BTC’s dominance hit a yearly low of 60%.
From this point, however, the selling pressure placed on the nascent market ramped up, with investors fleeing altcoins in favor of the sense of security that Bitcoin provides due to its liquidity.
BTC’s dominance over the market has risen significantly in the time since.
Analysts do believe that this trend may soon shift, however, as it is possible that its dominance will soon crater by up to 8%. This would provide altcoins with a major boost.
Bitcoin’s Dominance Remains Stable Around 65%; Here’s Why That May Soon Change
At the time of writing, Bitcoin’s dominance over the aggregated cryptocurrency market sits at around 65%.
This marks a sharp climb from yearly lows of under 60%, but a decline from highs of 68% that were set at the start of the year.
The benchmark cryptocurrency’s dominance provides significant insights into trends seen amongst investors, as higher dominance usually suggests there is more fear regarding where the markets might trend next.
One analyst does believe that more capital will soon flow away from Bitcoin and towards altcoins as investors grow less fearful, causing BTC to cede between 5-8% of its dominance.
“About two months later and I believe we are finally ready to make the move down to 57-60% dominance. You know what that means,” he said, eluding to the possibility of an imminent “altseason.”
This Trendline Could Slow the Descent of BTC’s Dominance
Other analysts are noting that this decline may not come about swiftly, as Bitcoin’s dominance has been guided higher by a trendline that has persisted for over 880 days.
Another trader spoke about this in a recent tweet, explaining that he is cautious on altcoins until this trendline is firmly broken.
“Going to be extra cautious this week on alts. While most look very bullish we are still riding this 882 day trendline. I believe BTC is more volatile this next week thus have to be more careful with alts. Could get some amazing entries and bullish retests on them,” he noted.
Image Courtesy of Pentoshi. Charts via TradingView
Whether or not altcoins gain independent momentum as a result of Bitcoin losing some of its market dominance could be largely dependent on this single trendline.
Featured image from Shutterstock.

Why Consortium Blockchains are Failing

New Zealand Terrorist Claims He Made Cash From BitConnect