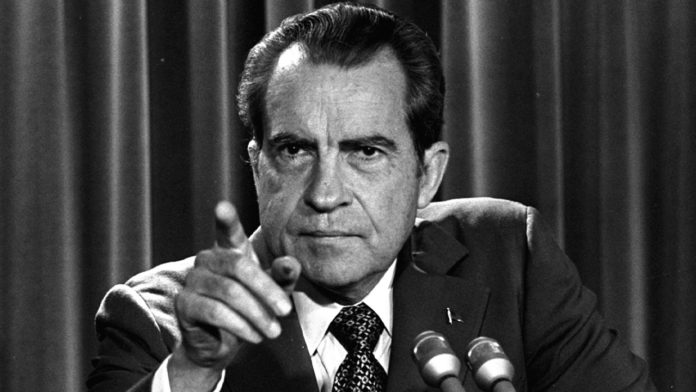 Approximately 50 years ago today, Americans were introduced to ‘Nixon Shock’ when the 37th president of the United States suspended the convertibility of the U.S. dollar into gold. Since this point in time, the U.S. economy has never been the same as many believe Richard Nixon ushered in a new era of uncontrollable fiat currency creation.

Today is the anniversary of when U.S. president Richard Milhous Nixon told the American public on August 15, 1971, that the administration along with the Treasury would immediately suspend the U.S. dollar’s convertibility into gold. Nixon essentially revealed the removal of the gold standard from the dollar and it would never return. Moreover, what the American public isn’t fully aware of is why Nixon and his cronies decided to remove gold’s exchangeability with the dollar.

The reason why Nixon removed the gold standard is because the U.S. could not hide the massive war expenditure that was fueling the Vietnam War. Part of the Bretton Woods deal was crafted so the U.S. was the holder of three-quarters of the world’s gold. War expenditure under Nixon was so massive other countries like France started taking notice of the U.S. printing massive amounts of USD. On the afternoon of Friday, August 13, 1971, Nixon and members of the Treasury secretly met at Camp David.

According to testimony and reports, the secret Camp David meeting was very contentious and led to a huge debate. By the end of the meeting, the Nixon administration ultimately decided to break up the Bretton Woods agreement. Speaking on television on Sunday, August 15, 1971, Nixon said that he instructed the 61st U.S. secretary of the Treasury, John B. Connally, to suspend gold convertibility with U.S. dollars.

“In recent weeks, the speculators have been waging an all-out war on the American dollar,” Nixon said on TV. “The strength of a nation’s currency is based on the strength of that nation’s economy— and the American economy is by far the strongest in the world. Accordingly, I have directed the Secretary of the Treasury to take the action necessary to defend the dollar against the speculators,” the 37th U.S. president said. Nixon added:

I have directed Secretary Connally to suspend temporarily the convertibility of the dollar into gold or other reserve assets, except in amounts and conditions determined to be in the interest of monetary stability and in the best interests of the United States. Now, what is this action— which is very technical— what does it mean for you? Let me lay to rest the bugaboo of what is called devaluation.

Ever Since August 1971, the Dollar’s Value Has Eroded, the Military-Industrial Complex Has Grown Massive, and Bureaucrats Can’t Stop Spending

Of course, Nixon wasn’t telling the truth and the monetary devaluation of the U.S. dollar began to erode faster than ever before in American history after 1971. Nixon not only opened up the flood gates to a world of fiat like never before, but he also provoked the unaudited Federal Reserve and the U.S. military-industrial complex to grow massive after 1971. 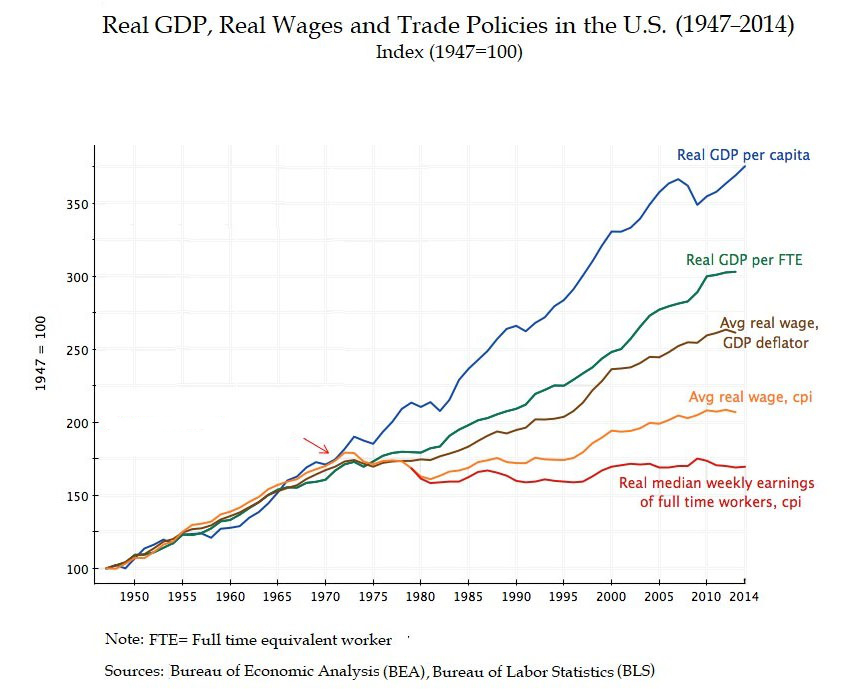 Under president Reagan, Bush, Clinton, GW Bush, Obama, Trump, and Biden the national debt has swelled to $28.6 trillion. There are now generations of American children who have not known what it is like to live in a country without excessive government spending and endless wars. Meanwhile, since 1971, American wages have stagnated like never before in history and citizens have been able to afford less and less as the years proceed. 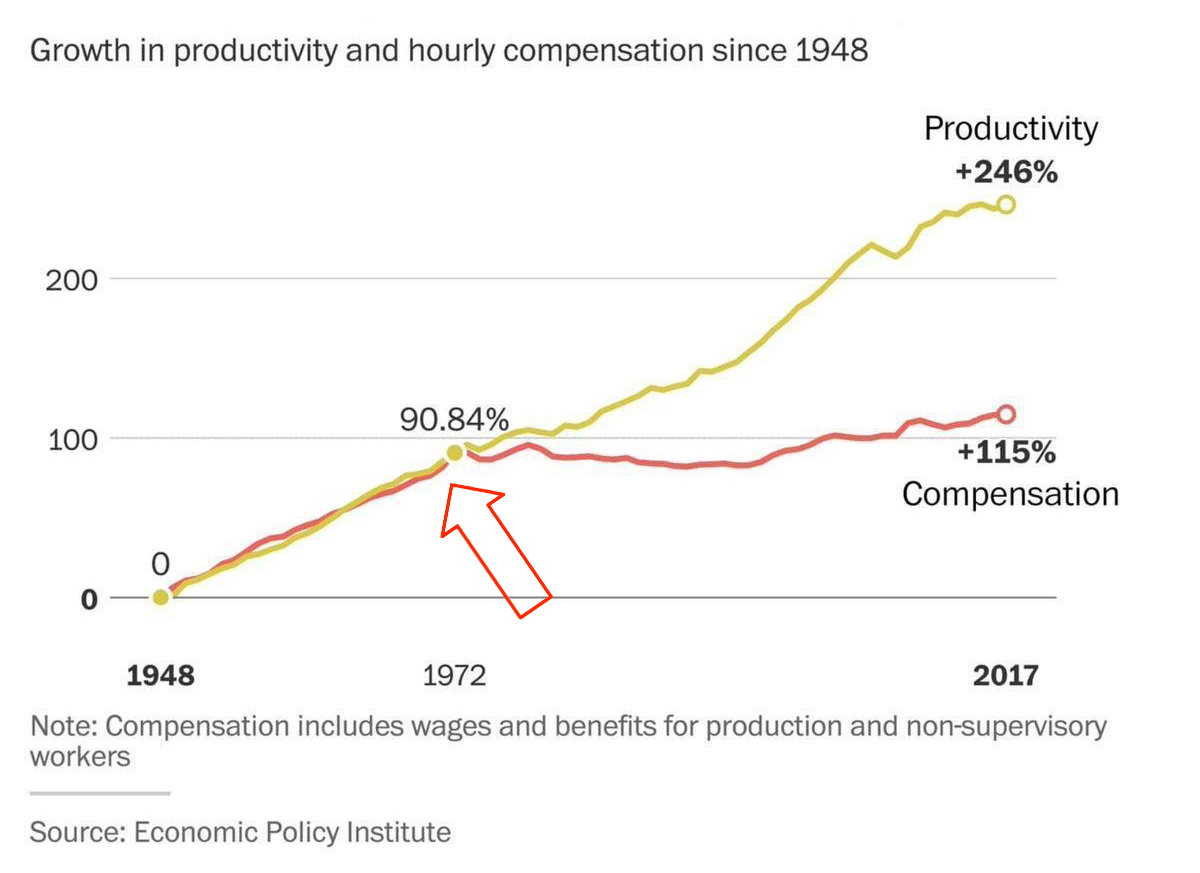 After Nixon said that his actions would “not win us any friends among the international money traders” he didn’t tell Americans that the military would need to enforce the petro-dollar to keep the Ponzi alive. 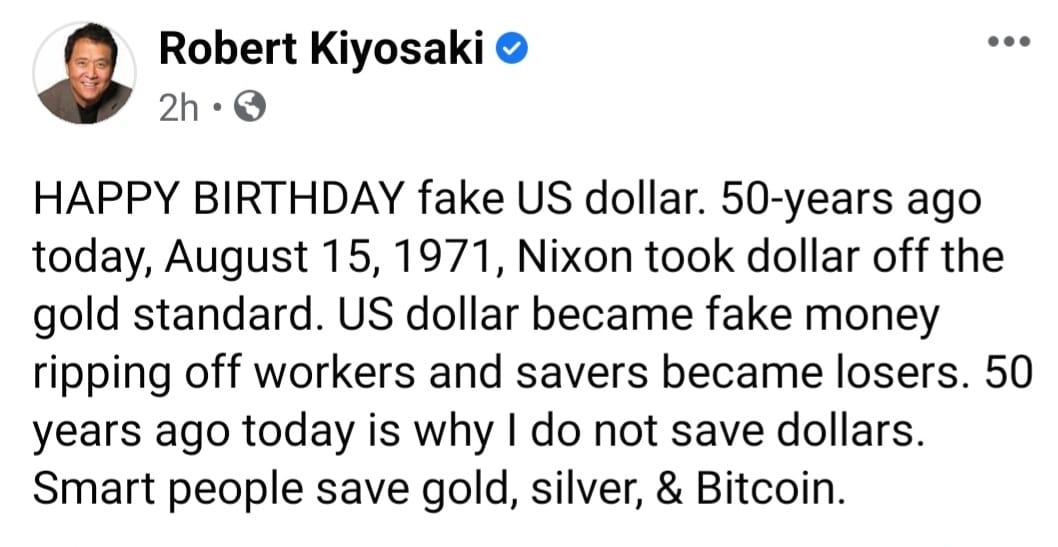 Since Nixon’s time, presidents from both the left and the right have continued to keep the money printing scheme going and have convinced Americans that because of crises like Covid-19, 9-11, and the 2008 financial collapse, bailouts are necessary. In 2020 alone, close to 30% of all the USD in existence was funneled into the hands of private institutions.

In 2021, the economy looks awfully bleak and investors are resorting back to gold and getting involved with crypto assets like bitcoin (BTC) and many others. The U.S. equities market is not situated in reality, the real estate market is extremely bubbly once again, the Federal Reserve owns one-third of all mortgage-backed securities and U.S. inflation is skyrocketing.

What do you think about when Richard Nixon removed the gold standard convertibility from the U.S. dollar? Let us know what you think about this subject in the comments section below.