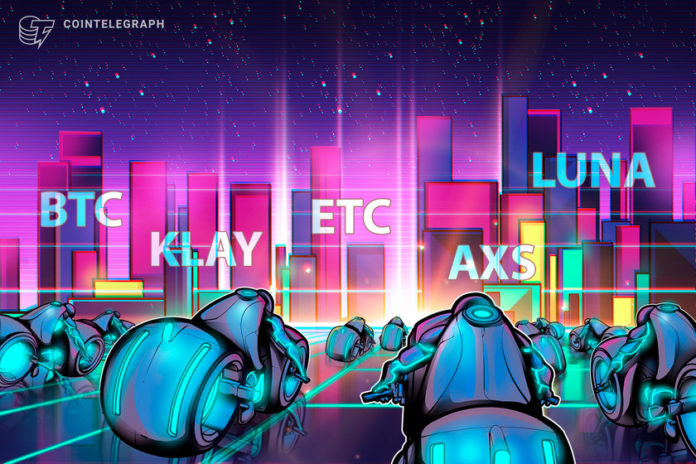 Bitcoin bulls are looking for BTC to rebound off a support zone and if confirmed, ETC, LUNA, KLAY and AXS could push higher.

Bitcoin (BTC) is facing a stiff challenge from the bears near the $48,000 mark. As Cointelegraph reported earlier, the buy and sell levels show that sellers on Binance have held their ground at $48,000.

PlanB, the creator of the stock-to-flow Bitcoin price model, said if Bitcoin manages to close August above $47,000, the year-end “worst-case scenario” target price of $135,000 may come into play.

Despite the slight downturn, the institutional adoption of Bitcoin continues to increase. Filings with the United States Securities and Exchange Commission show that four wealth management firms have bought shares in Grayscale’s Bitcoin Investment Trust.

A survey of about 42,000 people in 27 countries by product comparison website Finder, showed a high adoption rate in Asia. Among the countries polled, Vietnam had the highest adoption rate at 41% while India and Indonesia had a 30% adoption rate.

Compared to their Asian counterparts, the respondents in the United Kingdom and the United States reported a low 8% and 9% adoption rate. However, the report warned that “due to the varying Google infrastructure in each territory, not all surveys were nationally representative.”

Will Bitcoin’s hesitation near the $48,000 mark result in profit-booking? Could altcoins attract funds that exit Bitcoin? Let’s study the charts of the top-5 cryptocurrencies that may extend their up-move in the next few days.

The BTC/USDT pair could now drop to the support line of the wedge, which could attract buyers. If the price rebounds off this level, the bulls will again try to resume the up-move. A breakout and close above the wedge will invalidate the bearish pattern and open the doors for a rally to $53,000 and then $60,000.

The upsloping moving averages and the relative strength index (RSI) in the positive zone suggest that bulls are in control.

Contrary to this assumption, if bears sink the price below the wedge, the pair could drop to the 20-day exponential moving average ($42,682). If the price rebounds off this level, the bulls will make one more attempt to resume the up-move.

The flattening 20-EMA and the RSI near the midpoint suggest that the bullish momentum may be weakening.

If the price rebounds off the current level and rises above the overhead resistance zone, it will indicate that bulls are buying on every minor dip. That will suggest the resumption of the up-move.

Ethereum Classic (ETC) broke and closed above the overhead resistance at $63.56 on Aug. 13, completing an ascending triangle pattern. This bullish setup has a pattern target at $94.91.

Usually, after breaking out of a pattern, the price turns down and retests the breakout level. In this case, the ETC/USDT pair could retest the $63.56 level in the next few days. If bulls flip this level into support, the pair could start a new uptrend.

The rising 20-day EMA ($57) and the RSI in the overbought zone suggest that bulls have the upper hand. If the price breaks below $63.56, the pair could drop to the 20-day EMA.

A strong rebound off the 20-day EMA will suggest that the bullish sentiment remains intact. The buyers will then make one more attempt to resume the up-move. This positive view will be negated if bears pull the price below the 20-day EMA. That could result in a decline to the 50-day SMA ($51).

The 4-hour chart shows that the pair is in an uptrend. The bears are attempting to stall the up-move at $76.16 but the positive sign is that the bulls have not given up much ground. The rising moving averages and the RSI near the overbought territory indicate advantage to the buyers.

If bulls propel the price above $76.16, the next stop could be $84.16. On the contrary, if bears sink the price below $70, the pair could decline to the 20-EMA. A strong bounce off this level will suggest that the sentiment remains positive but a break below it may pull the price down to $63.56.

Terra protocol’s LUNA token has been trading inside an ascending channel for the past few days. The breakout and close above the downtrend line suggest the start of a new uptrend.

The bears have been defending the overhead resistance at $18 for the past four days. If the price rises from the current level or rebounds off the support line, the bulls will make one more attempt to propel the LUNA/USDT pair above $18. If they manage to do that, the next stop could be $19.54 and then $22.

Alternatively, if the price breaks below the channel and the 20-day EMA ($14), it will suggest that the bullish momentum has weakened. The pair could then retest the breakout level at the downtrend line.

The bears have twice stalled the up-move at $18, which makes it an important level to watch out for. The 20-EMA has flattened out and the RSI is just above 50, which points to a possible consolidation in the near term.

If the price rebounds off the 50-SMA, the pair could trade between $15.81 and $18 for some time. A breakout and close above $18 could start the next leg of the uptrend that could reach $20.81. Conversely, a break below $15 may signal the start of a deeper correction to $13.

Klaytn (KLAY) rose above the $1.81 resistance on Aug. 14 but the bulls could not sustain the higher levels. The long wick on the candlestick of the past two days suggests that bears are aggressively defending the overhead resistance.

The sharp rally of the past few days has pushed the RSI deep into the overbought zone, indicating the possibility of a minor correction or consolidation in the next few days. Any dip is likely to find support at $1.60 and then at $1.40.

If the price rebounds off either support, the bulls will make one more attempt to rise above $1.81. A breakout and close above this level will complete a rounding bottom pattern, which has a target objective at $2.90.

The 4-hour chart shows that bears thwarted two attempts by the bulls to push the price above the $1.81 resistance. If bears sustain their selling pressure and sink the price below the 20-EMA, the decline could extend to the 50-SMA.

Conversely, if the price rebounds off the 20-EMA, the bulls will make one more attempt to clear the hurdle at $1.81. If they succeed, the KLAY/USDT pair could rally to $2.18. The rising moving averages and the RSI is in the positive zone, indicate advantage to the bulls.

Axie Infinity’s native token AXS has been in a strong bull run in the past few weeks, hitting a new all-time high at $77.48 on Aug. 11. The long wick on the day’s candlestick showed that traders booked profits at higher levels.

The AXS/USDT pair has corrected to the immediate support at $63. If bears sink the price below this level, the pair could drop to the 20-day EMA ($51). The previous two corrections reversed direction from the 20-day EMA.

Therefore, the bulls are again likely to buy the dip to the 20-day EMA. A strong rebound off this level will suggest that the sentiment remains positive and traders are buying the dips. The bulls will then again try to resume the uptrend.

A breakout and close above $77.48 could clear the path for a possible run to $91 and then to psychological resistance at $100. Alternatively, a breakdown and close below the 20-day EMA may signal the start of a deeper correction.

The 4-hour chart shows the formation of a descending triangle pattern, which will complete on a breakdown and close below the support at $63. This reversal setup has a pattern target at $48.52. The flattening 20-EMA and the RSI near the midpoint indicate that the bullish momentum is weakening.

Contrary to this assumption, if the price rises from the current level and breaks above the downtrend line, it will invalidate the bearish setup. That could increase the possibility of a retest of the all-time high at $77.48.

The views and opinions expressed here are solely those of the author and do not necessarily reflect the views of Cointelegraph. Every investment and trading move involves risk, you should conduct your own research when making a decision.