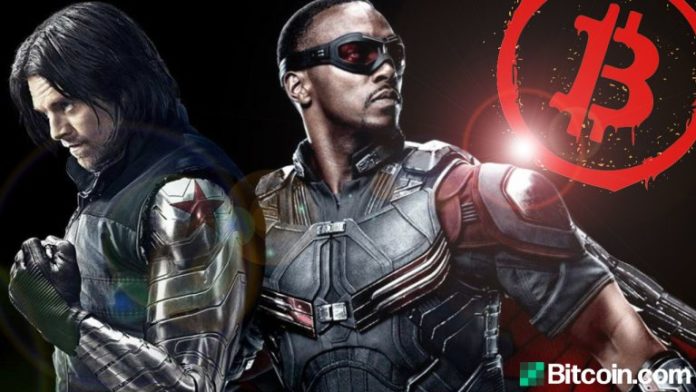 The leading digital asset bitcoin was mentioned on the action drama television show “The Falcon and the Winter Soldier.” The reference to bitcoin was caught by a Redditor while he was watching the most recent episode. It’s not the first time bitcoin has been mentioned on television and surely won’t be the last.

The Falcon and the Winter Soldier and the 1K Bitcoin Bounty

On Friday, a member of the Reddit forum r/bitcoin posted a screenshot of a message inside the TV show “The Falcon and the Winter Soldier.” The show stems from the Marvel Cinematic Universe and is streamed on the Disney+ platform. The picture the Redditor shared was for a BTC bounty and it said: “Selby dead. ₿1K BOUNTY for her killers.”

Bitcoin.com readers can check out the reference in episode three dubbed the “Power Broker.” At the time of publication, a 1,000 BTC bounty would be close to $60 million U.S. dollars.

The Redditor said he thought it was cool, but it was a lot cooler when BTC was mentioned on TV years ago. He said:

Was watching the most recent episode of ‘The Falcon and the Winter Soldier’ on Disney+. Noticed this text message inside the TV show. Thought it was cool, figured I’d share. Mind you this was a lot cooler like [five] years ago, back when I got into the bitcoin space, but still nice to see we’re making headway into cultural touchstones.

‘Just Paypal Me Some Bitcoins’

Of course, many bitcoiners know that BTC has been mentioned on TV many times in the past. Just recently, the television show “Shameless” referenced bitcoin (BTC) and ethereum (ETH). BTC’s first TV mention was on the episode of “The Good Wife” back in 2012 and Krusty the Clown from “The Simpsons” mentioned BTC the following year. On December 12, 2013, the now-deceased Alex Trebek used the digital asset in Jeopardy season 30.

A digital currency in which transactions can be performed without the need for a central bank.

Of course, the question was “What is bitcoin,” and the digital asset has continued to be named on popular television shows. BTC has appeared on shows like “Morgan Spurlock Inside Man,” “Navy CIS LA,” “Almost Human,” “House of Cards,” “Mr. Robot,” and more. “Just Paypal me some bitcoins,” they said on the well-known broadcast “Parks and Recreation” back in 2014.

What do you think about bitcoin being referenced on the Marvel Cinematic Universe show “The Falcon and the Winter Soldier?” Let us know what you think about this subject in the comments section below.