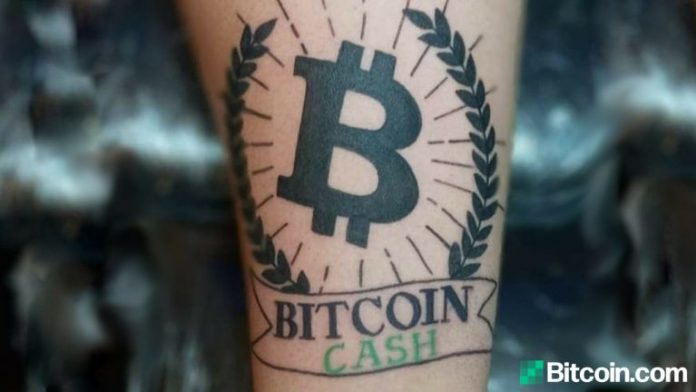 In order to spread the message about peer-to-peer electronic cash, some people talk about cryptocurrencies on a daily basis or wear t-shirts that display the bitcoin logo. Digital currency proponent, David Valenz, has taken the message spreading to a whole new level when he got a large tattoo on his forearm that displays a Bitcoin Cash logo. Valenz believes bitcoin cash is the best digital cash he’s ever used, and it’s beneficial to someone like him that lives outside the banking system.

Just recently, Bitcoin Cash proponent, David Valenz, decided to get a tattoo on his arm that displays the BCH logo in order to show people that cryptocurrency is a way of life to him. Valenz recently tweeted about getting his new tattoo and shared a video getting the ink work on Youtube as well.

The crypto enthusiast also said that the tattoo parlor accepted BCH for payment, which to him is “just another business that’s now accepting bitcoin cash.” Following the post on Twitter, Valenz further wrote about why he got the tattoo on the BCH-fueled blogging web portal read.cash.

“Cryptocurrency, more in particular [bitcoin cash] is the best digital cash I’ve ever used,” Valenz said. “Sending, receiving, being able to send a text of payment or email to someone alone is huge for me. I do not have a lot of money like a lot of people are blessed to have, but what little I have… I 100% throw all of it into crypto. It defines freedom to me.”

Valenz further wrote that he’s tried other crypto coins and “there’s always bugs, issues” and things he will nitpick about. However, with bitcoin cash (BCH), Valenz says the cryptocurrency has never given him any issues.

“So why the tattoo? It’s my way of life. It saved me,” Valenz insisted. “I have very very great friends in the crypto industry who are well off better than I am financially… And they understand my situation and it sucks… I wish it was different. If it wasn’t for crypto, I would literally be dealing with cash, on a physical cash basis with everyone I encounter… so If I was to have thousands of dollars, that would be a lot of money to protect, handle, etc,” the BCH supporter stressed.

Bitcoin Cash solves endless amounts of problems for me, so I appreciate it on a much higher level than most people could understand…

The crypto enthusiast’s story shows how much conviction people have toward spreading economic freedom, and how digital assets are changing people’s lives for the better. Valenz’s read.cash blog post highlights that he lives “outside” the banking system, which is pretty much like “living like a ghost” to Valenz.

There are billions of people who are dealing with crazy economies that are spiraling downward thanks to corrupt and manipulative governments. Millions of individuals are also “living like a ghost,” and many people worldwide have literally no access to banking necessities. Bitcoin cash (BCH) can help people safely store wealth and anyone can transact with the peer-to-peer digital cash in a permissionless fashion.

For this reason and many others, Valenz explains on the read.cash blog in his bio that he spreads the word of bitcoin cash (BCH) regularly. “Everyday to everyone I encounter,” Valenz’s bio says. “Why? Because it’s the future, and I can only hope one day it pays off,” he added.

Chatter Report: Zhao Says Blocking Customers ‘Not up to Us’, Lee...