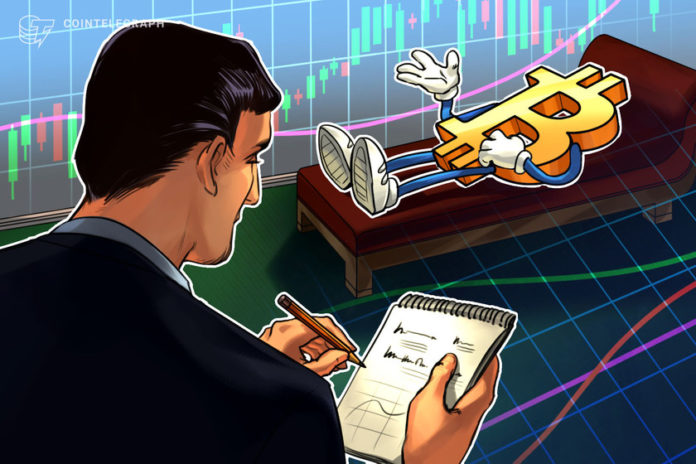 Bitcoin drops with U.S. stocks as the dollar finds momentum for an attack on earlier twenty-year highs.

Bitcoin (BTC) fell back below $20,000 after the Aug. 30 Wall Street open as data showed hodlers selling at a loss.

Data from Cointelegraph Markets Pro and TradingView captured the latest dive below the 2017 bull market peak for BTC/USD, with United States equities dropping in step.

The latest moves came as no surprise to traders already wary of a deeper correction for the largest cryptocurrency. Previously, many had called for a retracement toward the macro lows seen in June.

For popular trader Crypto Ed, both Bitcoin and Ether (ETH) offered good opportunities for an upcoming short trade. In Bitcoin’s case, the target was $18,000 if the area of around $19,800 failed to hold.

Fellow popular account Il Capo of Crypto stuck by a prognosis for major support at $19,000, with $16,000 then becoming a target should weakness prevail.

He subsequently noted that fading ask positions on derivatives platforms had opened up the potential for a fresh relief bounce.

“Feels like Bitcoin has a date with the red range below, between $17.8k–$18.9k. Is it guaranteed? Absolutely not, but it’s certainly something I’ll be watching for,” Caleb Franzen, senior market analyst at Cubic Analytics, stated the day prior alongside various charts.

“Quite simply, each breakdown has resulted in price retesting the low of the prior selloff. These “capitulation wicks” became the nice price target once the support trendline failed, eventually leading to a new “capitulation wick.” Bulls want this pattern to end.”

Turning to the U.S. dollar as risk assets tumbled, analyst JACKIS hoped that a top would soon be in after twenty-year highs reappeared this week.

$DXY closed the daily truly as an SFP and continues its correction today.

Remember lads, not confirmed top, until the low is lost but its a start

A break of the low would most likely result in BTC going to 22.5K ✍️ https://t.co/5kV7yz7gLU pic.twitter.com/PVbR9wDGJv

The U.S. dollar index (DXY) nonetheless saw a spike on the day, taking it above 109 and to within 0.5 of the highs from the day prior.

Should an about turn occur on shorter timeframes, he forecast, Bitcoin could gain the momentum to crack $22,500.

The views and opinions expressed here are solely those of the author and do not necessarily reflect the views of Cointelegraph.com. Every investment and trading move involves risk, you should conduct your own research when making a decision.

Bitcoin Worth May Soar Greater As $500M New Tethers Are On...