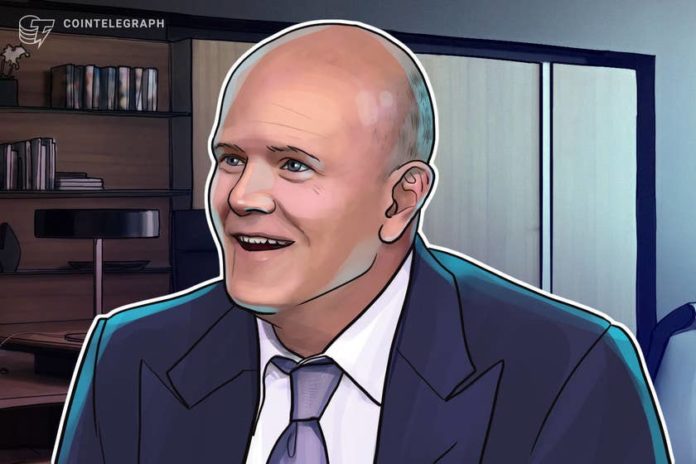 The crypto market is back to major price swings followed by a Bitcoin (BTC) price crash on Tuesday, the day the largest cryptocurrency became legal tender in El Salvador. But it was not unexpected for many crypto veterans, including Galaxy Digital CEO Mike Novogratz.

Speaking to Bloomberg, the billionaire Bitcoin bull said that crypto is still dominated by retail investors who are “too excited” by the recent interest from institutions such as Visa and Amazon.

People are realizing that “crypto is not just Bitcoin being bought as a hedge against bad monetary fiscal policy,” he said. “But maybe, more importantly, it’s Web 3.0. It’s the internet of value transfer.”

Retail investors got too long on leverage for good reason, according to Novogratz, who highlighted recent crypto-friendly news from finance and retail giants, such as Visa buying nonfungible tokens and describing them as a promising medium, and Walmart’s pursuit of a crypto product lead, as well as the job postings from Amazon for crypto experts.

Novogratz said that investors got too excited, and the price drop on Tuesday was “a little air being popped out of the balloon.”

As his company, Galaxy Digital, is planning to complete its acquisition of BitGo, the infrastructure provider of El Salvador’s official Bitcoin wallet, Novogratz also commented on the plagued start of the Chivo wallet.

The state-issued Chivo wallet experienced server capacity errors, but Novogratz believes the technical problems will be resolved over time. He said that the real question is how the system will work in six or 12 weeks, adding that doing such projects at scale is not easy.

Novogratz’s comments align with several analysts who pointed to overleveraged traders after the Bitcoin price crash. The largest cryptocurrency took a sharp dive to $43,000 on Tuesday, liquidating more than $3.54 billion in derivative markets. BTC is hovering around $45,000 at the time of writing.

‘XRP Army’ Accused of Harrassment After Intense Debate Over the Token’s...

Here Are the 7 Mistakes Made by New Bitcoin Traders