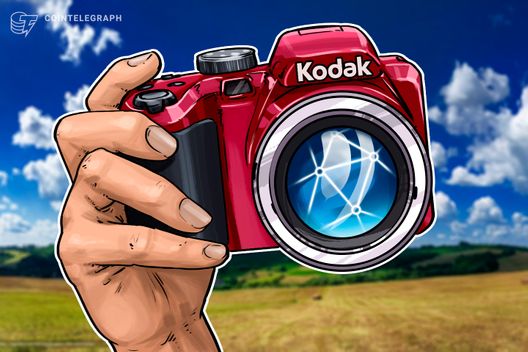 KodakONE has reportedly generated over $1 million in licensing claims for image rights during a limited beta test of its blockchain-based platform.

KodakONE — the developer of a blockchain-based image rights platform licensed by photographic industry giant Kodak — has reportedly generated over $1 million in licensing claims for image rights during a limited beta test of its platform. The news was reported by blockchain news source Breaker Mag on Jan. 8.

As Cointelegraph previously reported, the KodakONE Image Rights Management Platform is an image copyright protection, monetization and distribution platform secured via blockchain. While the project is not run by the Eastman Kodak company itself, the industry stalwart has made RYDE Holding (formerly Wenn Digital) an official brand licensee.

When Kodak first announced its partnership with then-Wenn Digital, the company’s shares surged to a high of $13.25, with onlookers criticizing the move at the time as a bid to cash in on the ICO and blockchain hype.

RYDE, together with ICOx Innovations, has overseen the design and development of the KodakONE Platform and its KodakCoin token. The latter is an ERC-20 token, which also uses components of the Stellar blockchain as middleware. The KodakONE platform, meanwhile, uses a hybrid blockchain infrastructure with Ethereum, Stellar and Hyperledger technology.

This October, KodakOne launched its beta Post-Licensing Portal (PLP), which uses an intelligent web crawler and image recognition technology to enable rights holders to track their images and rights infringements.

According to Chell, of the $1 million in revenue generated during the PLP beta, KodakONE will pocket around $400,000.

In the future, the platform reportedly aims to integrate the KodakCoin token for instant license settlement, as well as deploying smart contracts for license management at scale.

KodakONE co-founder Cam Chell told Breaker Mag that within the current photographic industry, even professionals are only managing to collect licensing fees from 20 percent of the market at most, due to the prohibitive costs of manual management. By harnessing the granular automation provided by smart contracts and blockchain, the platform reportedly aims to monetize that remaining 80 percent.

As reported, KodakCoin was registered with the United States Securities and Exchange Commission (SEC), using an instrument called the Simple Agreement for Future Tokens (SAFT), which limits sale to accredited investors.