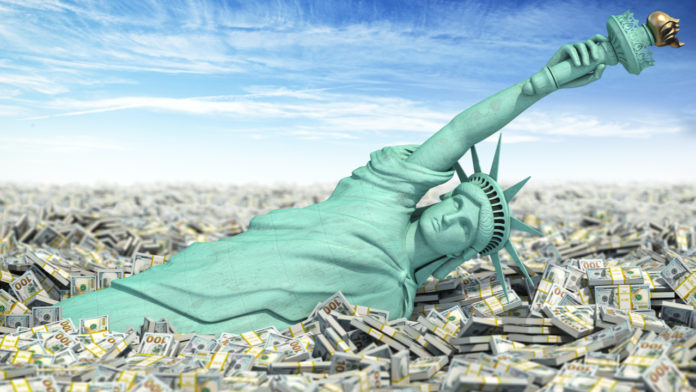 The Federal Reserve Bank of New York published the Survey of Consumer Expectations report on Monday, which shows U.S. consumers are expecting short-term inflation levels to be higher than usual. Meanwhile, the report also shows American consumers’ expectations of long-term inflation have reached the highest level since 2013.

While the 2,702-page, trillion-dollar infrastructure proposal is being debated, the U.S. central bank’s latest charts show Americans are very concerned about inflation. On Monday, the Fed’s New York branch published the Survey of Consumer Expectations (SCE) report, and the findings suggest worry over the loss of purchasing power is growing.

To make matters worse, the latest SCE report shows long-term inflation expectations have been the highest since August 2013. The SCE study takes a revolving panel of 1,300 American households in order to gauge the U.S. consumer outlook. Long-term expectations essentially represent what consumers believe will happen during the next three years.

According to the New York Fed’s respondents, it jumped from 3.6 in June to 3.7 in July. While inflation expectations have risen across the board, American consumers are also not too sure about their financial prospects over the next 12 months. The New York Fed’s survey showed the 12-month financial outlook was dimmer than usual but also claimed:

Consumers expect higher earnings growth and greater ease of finding jobs over the next year.

Furthermore, on the heels of the trillion-dollar infrastructure bill, the National Bureau of Economic Research published a working paper that reviewed the infrastructure investment’s effects and said it showed the “approach raises questions about the suitability of investment in infrastructure and other public capital as a short-run stimulus.”

Despite the negative outlook, Federal Reserve Bank of Richmond President Thomas Barkin believes inflation will be “temporary.” Reuters reports that Barkin thinks inflation will recede in Q4 2021, and said: “I do believe where we are right now is in a temporary thing.”

Monetary policy is stimulating the economy more aggressively than at any time since the Great Depression. Households also have more than $2.5 trillion in excess savings they are beginning to spend, unemployment benefits have pushed up the wage demands of new hires, and the economy is still turbocharged from the wildly excessive American Rescue Plan Act, passed this spring.

Meanwhile, even though it seems the trillion-dollar bill may pass, the hedge investment gold hasn’t performed as well as the precious metal usually does during massive spending discussions. The analyst and trader from Northmantrader.com’s Sven Henrich said on Monday:

Judging from the market reaction the biggest winner from the infrastructure deal is bitcoin.

As inflation expectations rise among American consumers, real-time inflation is hitting their wallets. The value of commodities such as barrels of oil, beef, cars, retail and commercial homes, and a myriad of other items have risen dramatically higher than 2020 prices. So much so that Energy News Network reported that American energy activists want a bailout to fix the high energy costs hurting the American economy. The Michigan activists believe utility customers need a bailout and U.S. representative Rashida Tlaib plans to introduce the bailout idea to federal policymakers on Thursday.

Can banks be their own bank? Deutsche Bank, BNY Mellon plan...

Anti-Bitcoin Banks Paid Over $243 Billion in Fines For the reason...